We’ve brought forth the issue of plastic straws plenty of times for you and here’s another quirky but powerful take on plastic pollution by acclaimed photographer Wes Kroninger.

History has shown us the power of a picture. If seeing is believing then we have seen and believed in the story and the message behind every iconic photograph. From the Afghan girl with her piercing green eyes shot by photographer par excellence Steve McCurry to the dark depth of Omayra Sanchez’s eyes shot by Frank Fournier, pictures speak a thousand words and evoke emotions so deep that sometimes they spark revolutions and bring positive change. Andy Warhol said it right ‘The idea is not to live forever, it is to create something that will’. Art, be it in form of movies or fashion or pictures, plays a huge role in bringing awareness about climate change and inspiring climate action. We’ve seen the impact of Leonardo Decaprio’s movie Before the Flood on global warming. Or the change renowned fashion designer Katharine Hamnett is trying to bring with her green protest tees. And inspiring change eloquently through the artistic medium of photography is today’s guest, renowned photographer Wes Kroninger and his most notable and stirring campaign on plastic straws.

Wes Kroninger is a multiple award winning photographer, well known for his inventive editorial and beauty portraiture—cleanly lit images with a vitality and vibrancy that impacts viewers immediately. Wes’s work has been published in renowned publications including Rolling Stone, Modern Salon, Rangefinder and his list of clients includes Vanity Fair, Home Depot and AVEDA. Wes has always been involved with social issues at a personal and professional level like award winning work with The Children’s Miracle Network in Baton Rouge as well as with Cancer Services of America. We’ve been getting very inspired by his work in the sustainability sector with his eye-catching campaigns on issues of water conservation and plastic straws. So here’s an exclusive interview of Wes Kroninger for UrbanMeisters. 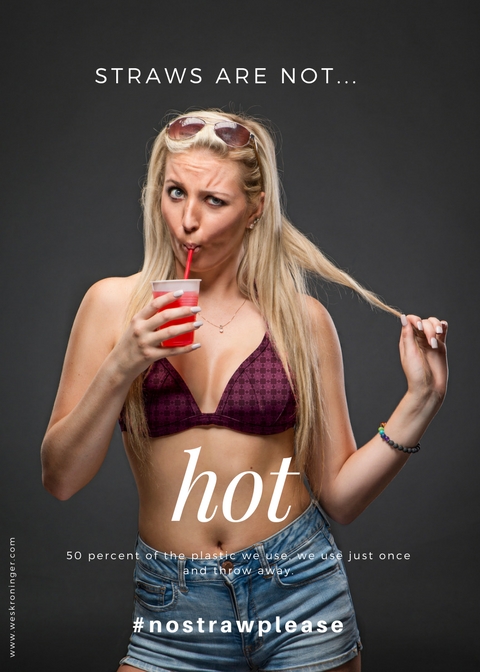 Hello Wes! Welcome to UrbanMeisters. We are exited to share your work with our audience. We’d love to know a little about your background in photography – when did the interest in sustainability themes start?

I have been a full-time photographer for close to 12 years. I specialise in photographing people for advertising and commercial photography. One of the most important things a photographer can do to advertise their own business is to photograph « personal work » which is work that is imagined and carried out by the photographer. I’ve found in my career that the best photographs were those created from a place of passion and that carry a specific message. Some have a comedic or dramatic tone but whatever the voice the message should be clear and get the viewer to think or re-evaluate. So I have always chosen to do my own personal work along those lines to create something that resonates with the viewer and gets straight to the message and it just so happens that a lot of the messages I’d like to deliver are related to environmental or cultural issues.

What motivated you to take up sustainability issues in your photography?

My wife of 16 years is an accomplished environmental scientist and through her knowledge of environmental issues I have become personally more observant of these things. My wife and I have lived in many different areas of the country and we also love to travel. Through this I have become aware that there really is no area in the country or the world that is not affected by some kind of local environmental issue. Humans have an impact on the earth in unique ways and to varying degrees depending on where they live. Many of these issues are so easily solvable that it is frustrating to think that they even still exist. One of the things that really drives me is a desire to shine a light on the hypocrisy underlying many environmental issues. 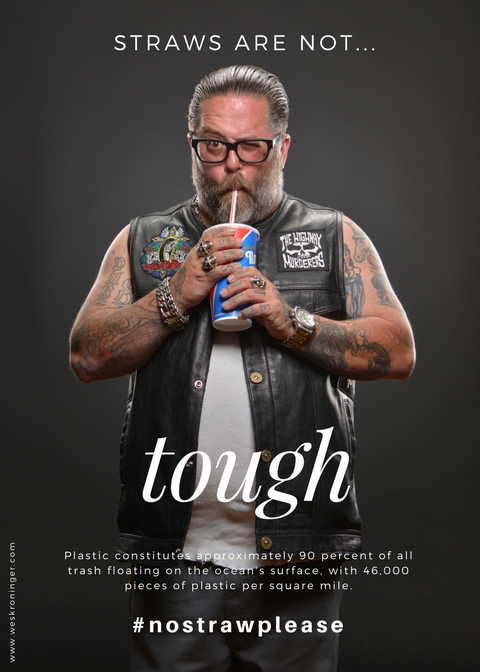 What role can images & photography play in spreading the word to bring more sustainability in everyday life and  act against climate change?

It is said that a photo is worth a thousand words and I really do believe that. The challenge is using the right imagery to convey your message. A lot of times with environmental issues it’s hard for people to see the forest for the trees. It is often not obvious what a big impact can be made through simple day-to-day lifestyle changes. When one simple act by a single person is multiplied by hundreds of millions if not billions of people that act can change the whole landscape. Vast social movements happen that way. So if creating imagery that shines a light on these small issues, or small hypocrisies, can get people to re-evaluate their own daily routine that is where a small difference can be made.

Photography capturing sustainable themes have been there for ages, but we do see that even powerful imagery like ‘the lone polar bear on melting ice caps’ don’t move people anymore (sadly). What in your opinion is powerful imagery that can motivate people?

This is difficult to define and would be different for each viewer. Some people react to real life and some people to a more comedic or satirical angle. Some people see certain messages as a direct attack on their way of life or political leanings. Whether that is right or wrong is not for me to judge but the goal is to keep sending the message out in different ways, filtered through multiple voices so it can have the most impact for the most people. The fact that interpretation is dependent on how the message is perceived is why we need more photographers, videographers, and artists to use their creative projects to help tell the story. Maybe someone could take a message I tried to get out and approach it from a different angle and that will resonate with someone I didn’t reach. The more unique ways the message can be delivered the more likely it is that the individual message will stick with someone. That is the goal. 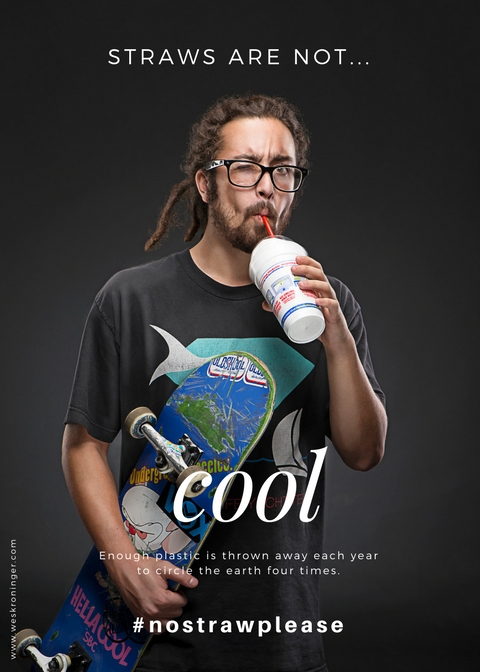 What are the new sensibilities you bring to the table?

I don’t know if anything I bring to the table is « new » per say, I just create imagery that I think would resonate with me. The pessimist in me sees that there is a level of complacency and a limited worldview at play with the destructive decision-making in many peoples lives. So much so that it feels silly. I find it easy to play off of this silliness in a way. I like to make the imagery innocent and abstract enough to draw the viewer in to learn the deeper meaning behind it. Hopefully, when they discover the deeper message, it will lead to an « ah-ha » moment.

What’s been your favourite sustainability campaign that you’ve shot so far?

I really liked the water conservation series I did when we were living in California. We had recently moved from Louisiana to southern California and the differences were striking. In Louisiana, the residents have more water than they can manage and on the flip-side, California was dealing with one of the longest droughts in the state’s history. I couldn’t help but notice California residents were still washing their cars and watering their lawns as though it was a non-issue. As humans, we tend to ignore a problem until it directly affects us. I visualised a moment when the water literally stopped flowing and what a wakeup call that would be. I titled the series « The Moment of Impact » and put out a casting call for models. We got a great response and brought in over 30 different models of all ages and races and proceeded to dump water on all of them in an attempt to capture the moment when the water hits them. I wanted the images to symbolise the moment of realisation that there was, in fact, a water crisis.

What is the green issue closest to your heart?

I don’t know that I have a single issue that I care about more than another. I think the single most important issue is for humans to figure out how to live in and benefit from a modern society while having the least impact on the overall ecosystem. How do we remind people they are a part of the whole system? Even though it may feel like it sometimes, people are not removed from the natural processes. Many of these issues have also become part of a pseudo-political identity that many people feel they have to be on one side of or the other when in reality science is not a political issue. Neil deGrasse Tyson said it best when he said, « The good thing about science is that it’s true whether or not you believe in it. »

Who are your sustainability idols? Any artists or personalities who have influenced your work?

Really it would have to my wife, Missy. She has literally dedicated her life to environmental science and being a good steward of the earth. I have learned so much from her about the world, the environment and our impact on it. I am certain that if not for her I would be living in denial of my own involvement in these issues.

We’d love to go behind the scenes a bit! When clicking a campaign or image, were there any ‘realisations’ moments? Any anecdotes that hit you hard?

I think some of the most interesting things about doing these images are how people react to them. Sometimes people just laugh them off then some people really surprise me. People that I wouldn’t expect to share the same views actually take it to another level by saying they go out of their way to do things like ask for no straw. That is always great to hear. Again I can be pessimistic when it comes to how people approach these issues and it is always nice to be surprised. Another thing that surprised me was that in the water “impact” series my initial thought was that people would look pained by the shock of the water hitting them. That was the concept after all. I was surprised to see people would be almost joyous once drenched. It didn’t change my direction of the concept, because believe me, there were plenty of pained faces, but it got me thinking about the human connection to water. That it really is a life force. I guess that’s why people love water themed parks so much.

What are some of the personal efforts you put into being green daily?

It is really just the simple things. I am by no means perfect, in fact I can be downright lazy, but I try to do simple things like asking for no straws at restaurants and bars, bringing shopping bags to the store, recycling, and trying to eat less meat. These are no great feats that need praise, but they are simple everyday things that if everyone were doing would add up to great change.

What’s next on your plate?

I’m not exactly sure. I try to let these ideas sort of find me. My wife and I recently moved to New Orleans. In a city that is consistently feeling the direct impact of the environment and human impact I am sure a light bulb will go off sometime very soon.

Wes’ first book Lighting: Design Techniques for Digital Photographers, exploring the creative and technical aspects of photographic lighting is now on shelves. As humans we are more inclined to think in images than words. Kroninger’s photos were a refreshing take on the battle against plastic straws that leave a lasting visual impact on the viewer. It makes one re-think our lifestyle!  Follow Wes Kroninger’s work on the following channels: